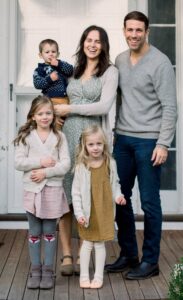 Jaime was born in Pawtucket, RI and grew up in Swansea, Massachusetts. Having grown up a nominal Roman Catholic, Jaime had little interest in God beyond maintaining a thin veneer of morality, which he often cast off at his own convenience. By God’s grace, during his junior year in college, he was born again while hearing a sermon on Luke 15. Shortly after college, Jaime served as a police officer, but after three years, though he loved the work, he resigned and moved to Louisville, Kentucky to pursue a Master of Divinity at The Southern Baptist Theological Seminary. During his studies, he met Dr. Mark Dever, Senior Pastor at Capitol Hill Baptist Church, and moved to Washington, DC to be an intern and serve as Mark’s personal assistant for the next two years. After this time, he moved to Providence, RI and served as Associate Pastor at Grace Harbor Church for the next year and a half. Jaime was called as Senior Pastor of Tremont Temple in April of 2017. He is married to Adriana and is daddy to Mercy, Audrey and Jack. Jaime holds a B.A. from Bridgewater State University in Criminal Justice, a Master of Divinity from the Southern Baptist Theological Seminary, and a Master of Theology with a focus on preaching from Gordon-Conwell Theological Seminary.

Joo Hye, a native of South Korea, joined Tremont in 2014 and serves as Organist/Music Coordinator and Director of Christian Education. She studied piano performance at Ewha Womans University (B.M., 2000) in South Korea and University of Missouri-Kansas City (M.M., 2005 & D.M.A., 2010). In 2015, she graduated with a Master of Divinity at Gordon-Conwell Theological Seminary in Hamilton, MA. She enjoys teaching music, leading Bible study on campus, and finding hidden gems in Boston.